Do you remember the shooting at the Twin Peaks in Waco that happened a few years ago? It made national news. Basically a bunch of bikers were having lunch and there was a shooting in the parking lot. In response, the District Attorney (DA) had all the bikers on the premises rounded up and locked in jail, including those who hid in the refrigerator or bathroom during the shooting. Most of these bikers clearly had nothing to do with the shooting.

Then, as if that wasn’t bad enough, the Justice of the Peace (JP) slapped each of the 177 bikers with million dollar bail!

What happens if someone is in jail, with bail set at a million dollars?

The bail bondsman requires about 10%, which in the case of a million dollars would be $100,000. The vast majority of the bikers could not afford this and were stuck in jail until the excessive bail was eventually overturned as unconstitutional.

What would happen to your life if you were in jail, unable to get out for weeks, or longer? You’d eat through your savings, because you still have to pay your rent or mortgage and feed your family, whether you are in jail or not. If you can scrape up the money to pay the bail bondsman, you do. You’ll never see that money again; it is not refundable even if you are later found to be innocent. Once you are out of jail, your job may be gone, and your hope of finding another one while waiting for trial is slim. And it may take years to get that trial.

Imagine how this would affect you and your family.

Imagine how awful all of this would be, especially if you did absolutely nothing wrong…you were simply eating lunch and someone else did something bad in the parking lot.

Excessive bail is unconstitutional because it ruins lives and is oppressive. We, as people wishing to live in a free society where people are treated reasonably and humanely, must not tolerate it.

The DA responsible for a lot of this lost his Republican primary. So he’ll be out of office in a few months. But there was no Republican challenger for the JP who violated so many bikers rights. And no Democrat challenger either. So the local Libertarian Party decided to do something about it.

They could not allow this JP to get re-elected by default. Libertarian Lauren Daugherty is running for JP in this race and is putting forth a very active campaign around the theme that “EVERYONE’S rights matter.”

Last Thursday was the 3-year anniversary of the shootings at Twin Peaks and the violations of so many bikers’ rights since. There was a memorial held outside the courthouse and Lauren and other Libertarians attended, to show their support for justice for these bikers. Notably, Mark Tippetts, Libertarian nominee for Governor of Texas, drove in from Austin, and Whitney Bilyeu, this region’s representative on the Libertarian National Committee, drove in from Houston. 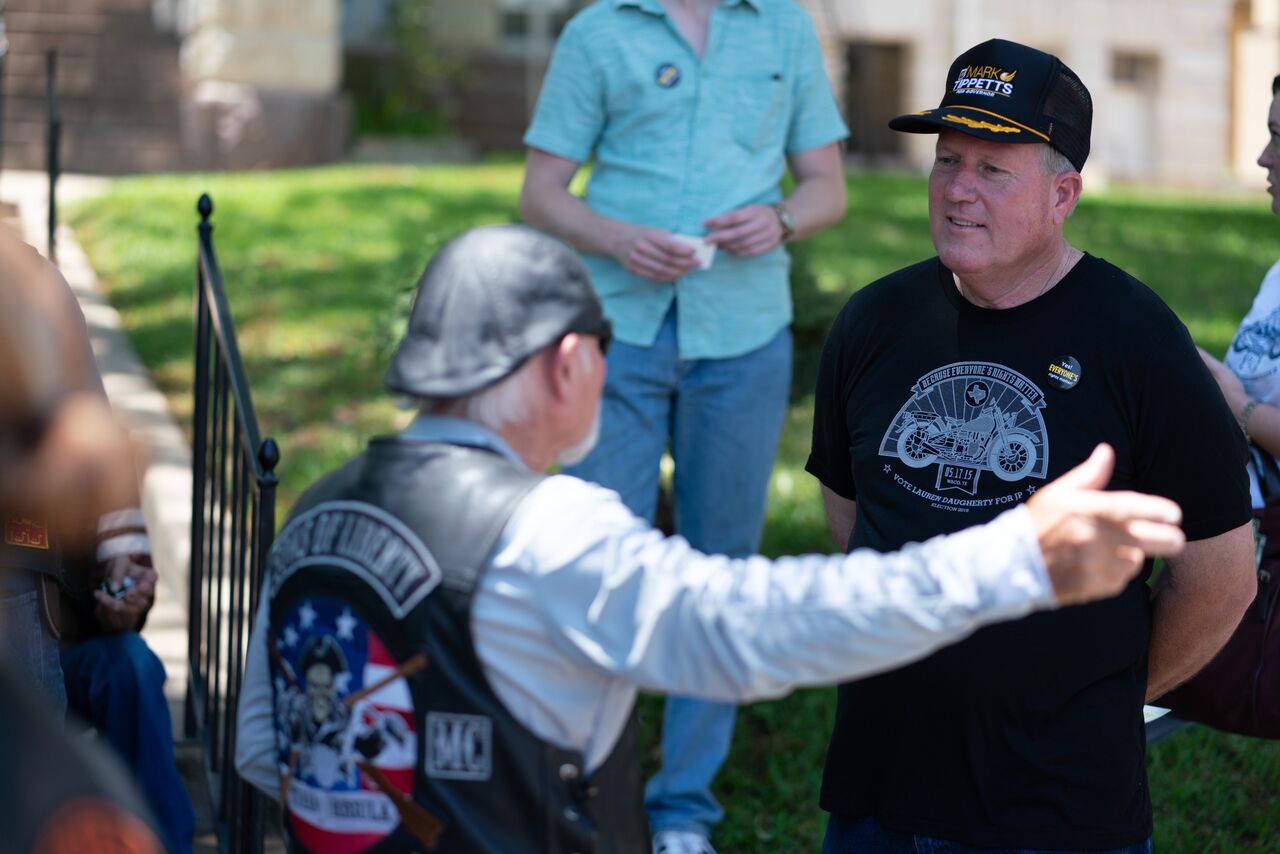 You may or may not know that before I was elected Chair of the national party, I was a public defender. I am passionate about justice and fairness. The way these bikers were treated is absolutely unconscionable. Judging bikers as a group, rounding up everyone without regard for their individual circumstances, and overcharged mass prosecutions deny the justice that each individual caught up in the Twin Peaks case deserves. I am proud that we have a Libertarian candidate standing up on this issue and competing against the JP who violated these bikers’ rights so severely.

This is what makes the Libertarian Party so different and special. Thank you for being a part of it.