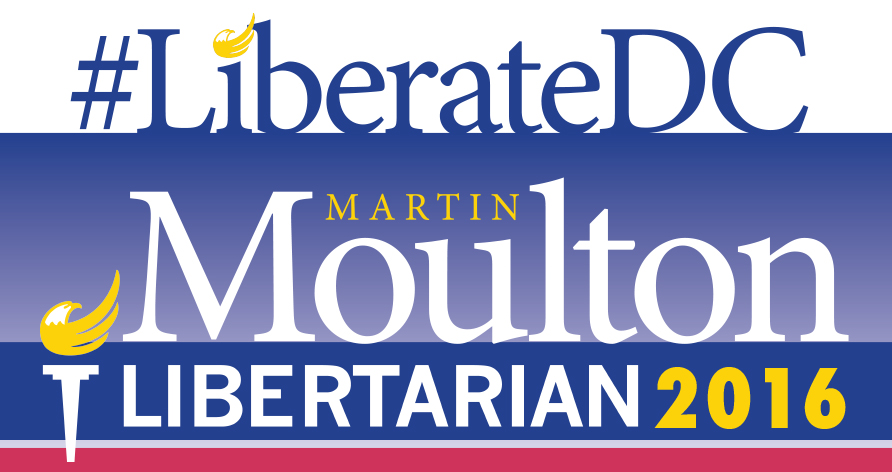 Washington, DC — 2016 Libertarian candidate for U.S. Delegate for the District of Columbia and long-time community activist Martin Moulton secured the endorsement of Dick Heller, successful plaintiff in a landmark case (District of Columbia v. Heller, 2008) in which the U.S. Supreme Court ruled that the Constitution protects an individual’s right to possess a firearm for self-defense within the home. Moulton aims to retire the 25-year establishment incumbent Eleanor Holmes Norton.

”Martin’s background, common sense, and focus on creative solutions make him the ideal candidate to rise above the partisan divide and deliver results for all District residents,” says Dick Heller. “Politically polarizing debates have gotten in the way of District residents enjoying the public safety, superb schools, economic opportunities, and freedoms we all deserve.”

Moulton, the son of a Costa Rican immigrant, knows that the District’s gun debates have distracted from violent crime that has terrorized many residents in neighborhoods like Shaw, where Moulton has lived for more than two decades.

”Costa Rica is the most peaceful nation in the Western Hemisphere and its rational personal carry laws are part of the reason its residents and its millions of tourists each year enjoy meaningful public safety,” says Moulton. “We certainly deserve no less in the Capital of the United States.”

”Although I am not personally a firearm owner or enthusiast, I recognize that law-abiding citizens — whether they are lesbians and gays whose very existence was once marginalized, demonized and criminalized in the District — or local business owners and lawful private citizens who simply seek to own firearms for self defense — don’t need government officials using us as pawns in their polarizing distractions from solving critical issues,” said Moulton, now age 50, who identified as gay and “came out” to his loving parents as an 8 year old.

For decades, without an effective advocate in Congress, District families have struggled to get their children into world-class schools in the Nation’s Capital. Thousands of citizens face unemployment which destabilizes communities, and District activists have failed to secure sufficient bipartisan support for D.C. Statehood to Liberate D.C.

“We have many critical issues that need urgent attention,” he said. “Ms. Norton has had plenty of opportunity to deliver more safety, freedom, prosperity, and better schools for DC residents. It’s long overdue for someone new to succeed where she has failed.”